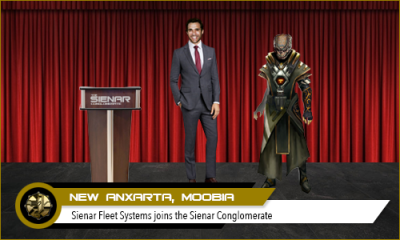 Vice President, Bart Roberts, along with the Chief Executive Officer of Sienar Fleet Systems, Silus Nidor, walked into the Sienar Conglomerate press corp briefing room promptly at 11:00 am galactic standard time. The chatter in the room dropped off quickly as the Vice President took the podium.

Good morning, ladies and gentlemen of the KNN press corp. I am pleased to announce that Sienar Fleet Systems has joined the Sienar Conglomerate. I am thrilled to finally see the Companies that Raith Sienar built so long ago back under one banner. I am also honored that this momentous occasion has happened on my watch as I am sure CEO Nidor is as well. We have worked alongside Sienar Fleet Systems for some time now. It is good to see our friendship grow into a partnership. While we still have some final details to work out, I think we can all agree that this partnership will strengthen both the Conglomerate and Sienar Fleet Systems. I do look forward to working with CEO Nidor and his team over the coming weeks to hammer out the final details of this deal. In the meantime, I ask everyone to give Mr. Nidor and his staff a warm welcome into our fold. I will now turn over the podium to CEO Nidor for his comments.

Vice President Roberts stepped back, turned to CEO Nidor and motioned for him to take the podium.

Good Morning, thank you for the kind introduction. It is with great honour that I feel that i’m returning Sienar Fleet Systems to its rightful place as a proper part of the Sienar Conglomerate. I have personally been involved with the ship manufacturing industry for more years than I can count, in that time I have had the honour of working for some of the largest Ship manufacturers in the Galaxy in Transgalmeg Industries and being 2IC of Corellian Engineering Corporation before forming Zonama Sekot Shipbuilders which became Sienar Fleet Systems when I was fortunate enough to acquire the name for a few years back. I have also had the pleasure of knowing Vice President Roberts for many years and admire the work he has done in turning the Conglomerate into one of the largest independant Manufacturers and suppliers of Items in the Galaxy. I hope that by joining into this alliance and rejoining Sienar Fleet Systems with the Conglomerate that it will help bring even more opportunities and prosperity to all involved. Once again Thank you to Vice President Roberts and everyone else who I have had the pleasure of meeting so far for making myself and my Colleagues feel very welcome and at home already.

As CEO Nidor finished his comments and stepped back from the podium the two gentlemen shook hands as several camara droids buzzed around taking pictures.