The Falleen Federation and Sienar Conglomerate join the Galactic Concordiate

As nightfall drew in over the skies of Taanab, only the whistling of fireworks could be heard above the revelry of crowds below, where at the Trade Federation Palace, just a few hours earlier, representatives of the Galactic Concordiate had met to finalize the treaty which would admit two new members to the group: the Falleen Federation and the Sienar Conglomerate. It was widely hoped that the recent shakeup of the bloc would renew interest in its ability to act as a guarantor of stability and peace, and kindle an era of closer cooperation amongst neutral powers.

King Dur`rik, in a speech to the Sejm, set out his government’s position on membership of the Concordiate: “Our Charter of Confederation states that ‘we join together as brothers and sisters, accepting equally those Falleen lost among the stars and those others desirous of freedom and peace, in a firm league of friendship with each other for common defense, the security of our liberties, and our mutual and general welfare.’ Although it has been six years since we declared neutrality, I have been determined always that our Federation should uphold those values as a model; that it should not be an island unto itself. With the Second Treaty of Forsetti, the Galactic Concordiate has demonstrated its commitment, not only to those ideals which we cherish, but a willingness , too, to argue that neutrality is not merely to stand by, as the passive observer, it is to develop our societies on our own terms, and in a spirit of cooperation with others across the galaxy.” 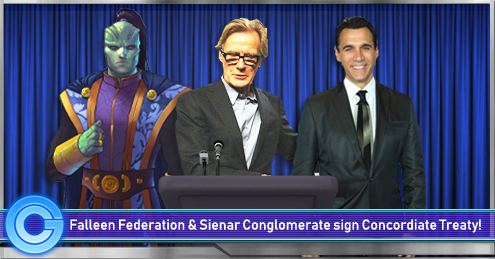 The Falleen Federation’s admission to the group was therefore considered a major success of the alliance’s reforms. The parallel application of Sienar was, however, considered a surprise, given the Conglomerate’s history of independent neutrality.

“Sienar has always been an independent and neutral corporation,” noted Bart Roberts, Vice President of the Sienar Conglomerate Board of Directors, speaking on behalf of the Conglomerate. “It has been a guiding principle since our inception fifteen years ago, and shall always be so. Nevertheless, we have wanted to be a part of building a peaceful galaxy for some time now. But, it was never clear how exactly a corporation such as ours would ‘fit in’ with the Galactic Concordiate as it was first organized. As a non-government, we were simply ineligible to join the group’s upper leadership. Now that full equality to all members has been granted, we are confident of our place and role in the group. And while we accept that the Concordiate is not a perfect solution to the problems that plague our Galaxy, we believe that it has the best chance of making a reality of the vision for an organized group of neutral governments and corporations based upon the rule of law, and respect for the sovereignty of its members.”

Concluding the press conference which followed the signing, current Magistrate of the Concordiate, Jacob Jansen, explained why the Galactic Concordiate appeared to stress the importance of collective action only now, six years after its creation. “When we founded the Concordiate it was conceived as a way to organise the existing relationship between its founders. We did not envisage it as a political ‘project’ of any kind; there was no need to. However, as Lady Hegemon Stephanie Barefoot expressed clearly two months ago, the galaxy has changed drastically since then. Lawless groups have emerged and targeted those of the galaxy willing to operate by the norms of civil diplomacy. Ignoring the problem has seen it grow, and further inaction will simply continue to undermine the role which peaceful diplomacy and mutual cooperation play in building the sustainable peace and prosperity the alliance has enjoyed. If the Concordiate seems now to be a ‘project’ then it is because we think that one is necessary.” The Magistrate underscored the importance of self-restraint, which major powers would need to exercise if such a project was to be achieved. “Groups like the Trade Federation must lead by example. We have to accept certain limitations on our role and power within the alliance if our partners’ voices are to be adequately heard and considered. The Concordiate has striven to achieve that balance with its new treaty, and the results are reflected today with the signing of two members varying significantly in power, history, and relationship to the Galactic Civil War.”

Six of the larger governments and corporations spread across the galaxy have now signed up to the ‘third way’ encapsulated by the Second Treaty of Forsetti, making the Second Galactic Concordiate one of the largest organisations in galactic history.